Supermarkets Here Are Up to Something

As you know, my eco-warrior friends and I have been campaigning outside our local Countdown supermarket each weekend for a couple of hours with our reusable bags, trying to get people to buy bags from us, prompting them to bring their own and generally just being a reminder about plastic bags not being good.


Well a few weeks ago we were excited to hear on the news that Countdowns nationwide will be quitting plastic bags, as from 2018! Not only was that great, but only a week after that New World supermarkets announced that they too will quit plastic bags from 2018. That is pretty much all of our supermarkets, as the one other chain already charges people for plastic bags.
The supermarkets have plans for providing reusable bags - New World plans to give away thousands of free bags over the summer, and Countdown has dropped the price of theirs to $1.

We have been so excited by this because our government was pathetic, they wouldn't issue a nation-wide ban. Good news there too - we've just had a change of government to a more eco-minded one, so we are waiting to see some positive changes for our environment.

The announcement has brought about a change of attitude to what we are doing too. The girls report that instead of our bags selling slowly - they are now flying out - they've been selling 3-4 times as many.

We've had some media promotion for our Boomerang Bag making recently (got our picture in the local paper), and one spin-off was that yesterday I got to talk to a group of Girl's Brigaders, who are embarking on making produce bags for their families.

Another positive from New World supermarkets has been their Little Garden giveaways. This is the second year that they have given away these cute little pots of lots of different types of seeds. 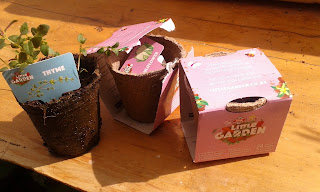 The only non-biodegradable part is the wee name card - provided you didn't buy their stupid plastic watering system. They make a nice change from the usual plastic ticky tacky toys they give out as promotions.
People have been loving them, and now that the promotion has finished, they have donated boxes of leftover seed pots to schools and kindergartens. 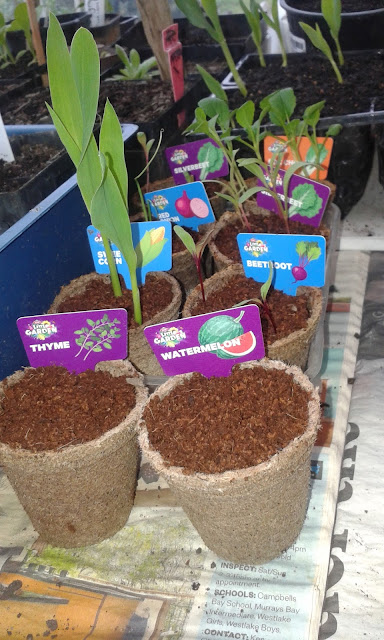 This is the celery patch that is growing from last year's starters. It's the best celery I've ever grown - with very little input from me. 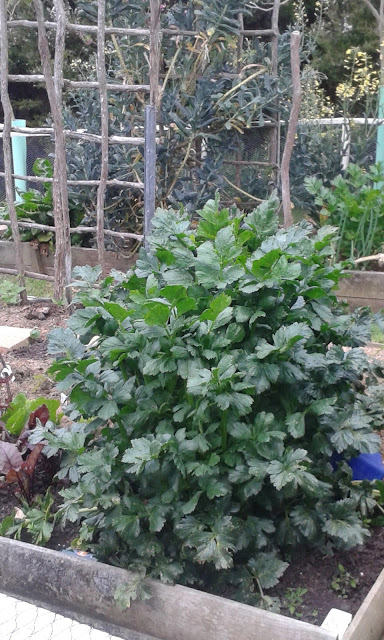 Well that's all for this week, a bit of happy news, eh. It's Labour weekend here, when everyone traditionally swarms the garden centres and starts planting. Not us though - we've grown all of ours from seed (except the basil which didn't come up).
Posted by Anne@ArtyGreen in Paradise at 23:04 8 comments:

What to do with Pumpkin Skin and About Viscose.

Sometimes I have a collection of snippets that make their way into my blog - this is one such time, so sorry, it is a bit disjointed.

It has been a busy weekend, part of which was playing sax in a charity event after being invited to join a few others. 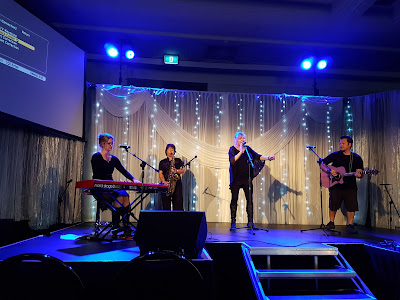 Viscose for cool playing
I had some idea that viscose and rayon were plant based materials, and being natural, were therefore breathable - which is important when I'm playing in the band as it gets really hot up there sometimes.
Having picked up a viscose top recently, I thought I would check. It turns out that these materials won't wick moisture away from the body, so maybe not so good if it's really humid (and you get really sweaty), but they are breathable.
They won't give off plastic fibres when washed, but the process to make viscose/rayon has a lot of chemical/processing - much more than say, cotton.
More earth friendly if it's second hand.


Is it called viscose, or rayon?


Great question. There is some confusion between the two terms. Viscose is actually a type of rayon, even though “viscose,””viscose rayon,” and “rayon” are often used interchangeably. What started as “artificial silk” in the late 19th century became known as rayon in 1924, with the name “viscose” coming from “a viscous organic liquid used to make both rayon and cellophane.”  Rayon is “the generic term for fiber (and the resulting yarn and fabric) manufactured from regenerated cellulose by any one of six processes.” Keep in mind that modal and lyocell, along with viscose, are also considered types of rayon.

I also attended The Rubbish Trip presentation - which consists of Hannah and Liam, who are travelling throughout New Zealand talking to audiences in every city about reducing their personal rubbish footprint. 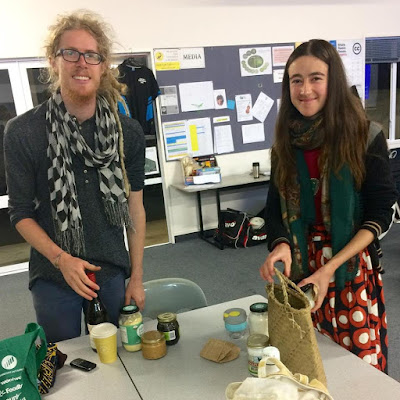 I recommend it if you are in New Zealand and haven't seen them yet.They have another 9 (?) months to go. I thought they were awesome, just love what they are doing.
It was practical, and having researched local places to buy packaging-free made it all easier for people.
The presentation was well attended by about 100 people of all ages.

Pumpkin Skin - do you eat it? We normally do, but a recipe that I used recently needed to have the skin off. Previously I would have just composted it - but this time I roasted it while cooking other things and added it to the dog's food. He was really pleased.
Timely for Halloween I thought - cook up any unwanted pumpkin - dogs love it.


Posted by Anne@ArtyGreen in Paradise at 19:12 7 comments:

Anne@ArtyGreen in Paradise
Hi I'm Anne, lucky enough to live with my partner Derek and his daughter Katie on an acre of coastal paradise in Northland, New Zealand. I'm keen to green, with slow living and creativity. Leaving the nursing profession in December 2012 is allowing me to play music (sax), garden and create to my heart's content. Pop over to my Pinterest board if you wish..http://www.pinterest.com/lifeatriverhill/from-my-blog/