It was beautiful weather here over Easter. The days were hot and the beaches crowded on Waiheke Island where we went to catch the Jazz Festival. Not bad for Autumn.
Just a few more mailbox pics, as Waiheke has the greatest selection of arty letterboxes of anywhere I have seen. 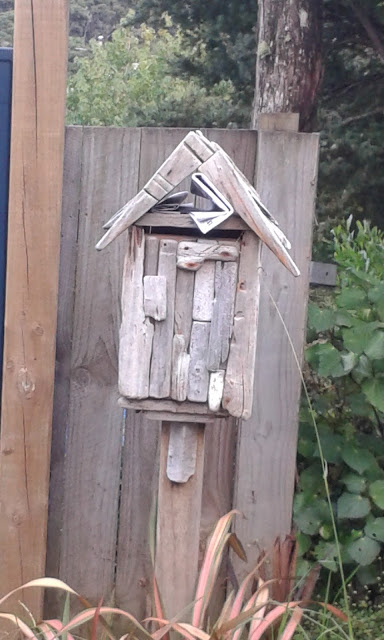 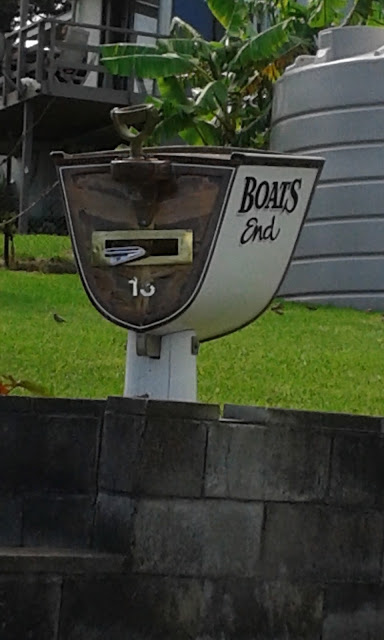 We came home with a carload of "stuff" from Waiheke, including a bag of seaweed for the garden and these two items that we found dumped on a side road. 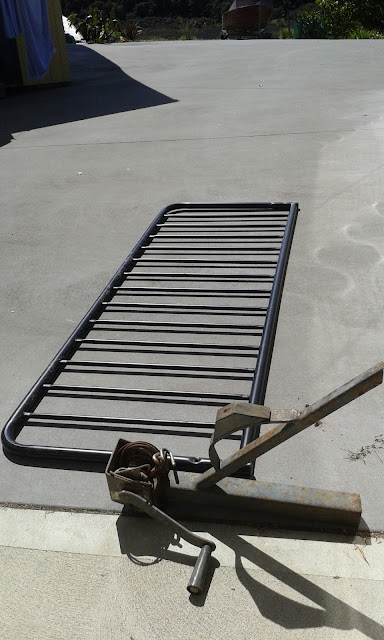 The winch will replace the one on our boat trailer - being of superior quality, and the frame, which came with hinges attached, was originally the canopy of a swing seat we think. It will be put to use as a wall-attached drying frame. It annoys us to find people have dumped things carelessly in such a beautiful place.

As a follow up to my earlier post about Turmeric Bombs, I have been unable to take the therapeutic dose of turmeric, due to the somewhat laxative effect of the coconut oil, so today I will be making Turmeric and Honey Jellies - little jubes, to see if that will work. I'll keep you posted!

Not long ago we received a basket of flowers, which was a lovely gesture. But when the flowers had all died, we were left with all of this "stuff" to dispose of. (Of course I didn't throw it out, but will use it to gift flowers from my own garden, except for the foam)

Oasis foam is a pet hate of mine - it is a single use item that is used massively throughout the world. It is made of  formaldehyde foam! You would think that, being all about nature, floristry would be a bit greener. Well hopefully that day is coming - hooray!
I have just read about a product called Floral Soil created in the USA that is totally biodegradable, that is a replacement for floral foam.

You can read about it here. It's not available here in New Zealand yet, but hopefully it won't be long.
Now they just need to replace the plastic floral tape, the plastic cellophane (even though ordinary cellophane is biodegradable), and all the other plastic sh#*t that goes into arrangements at present.

Women in Clothes
I just love the local library! Recently someone on the Facebook group No New Clothes For A Year recommended this book - "Women In Clothes" - so I requested that our local library might stock it, and within a few weeks it was there! 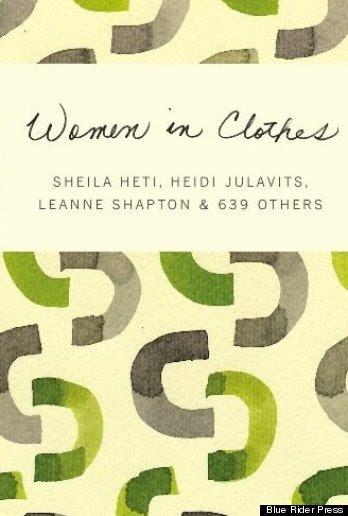 I'm totally enjoying this book - it is full of interviews with women from around the world about their attitudes to their clothes, and it is seriously unconventional. For example some women send in photos of their mother before children and comment on their look, there is one part about perfume and the smell of clothing, there is a series of conversations where women compliment others on their clothes and the responses, and some short stories involving clothing with meaning. Even the photos are not what you would expect.

This section had six strangers wear each others favourite outfits.

And a quote to help you feel better.....

'Sometimes I think to myself "Drop the book and get things done." Then I laugh and turn the page.' Unknown
Posted by Anne@ArtyGreen in Paradise at 14:20 3 comments:

I don't know about you, but I get joint aches.
A while back I posted  here about Golden Yogini Drink, as a way to get turmeric into the system, given that turmeric is being hailed as a great anti-inflammatory agent that is known to reduce joint aches, and also helps with sleep.
Well and good, but it wasn't happening on a daily basis, and I read that the therapeutic dose of turmeric is about a teaspoonful/day.
My friend Di told me she had great results with turmeric capsules - but I'm not good at taking supplements and they languish in their bottles.
So good old Pinterest to the rescue. I found a recipe from Empowered Sustenance.com for turmeric bombs, which will deliver the required dose.

I have altered their recipe a little - leaving out the quercetin powder, because I don't have any, and because I read that it is found in many fruit and vegetables anyway.
Their recipes used either honey or coconut oil to bind the turmeric powder - but I thought it made sense to use half of each.
The ground black pepper (piperine) has been shown to increase the availability of curcumin (the beneficial part in the turmeric) by 150%..facts from the above mentioned site.
The bombs are palatable enough to eat, almost like an Indian sweet.

I mixed it all in a cup. At this point I needed to put it in the fridge to harden up enough to roll into balls of about half a teaspoonful each.
I then put them into the freezer on a baking tray, and when frozen, into a jar which I store in the freezer.

I'm taking several per day - it is possible to have too much, but I'm hoping this will be enough and that I will keep remembering to take them. "Too much" is much bigger doses than this and there can be a toxic effect. There is also some warning around people on diabetic or blood thinning medications, as turmeric can alter their effect.
I hope that they do the trick as it is early days yet.

Posted by Anne@ArtyGreen in Paradise at 18:01 2 comments:

Email ThisBlogThis!Share to TwitterShare to FacebookShare to Pinterest
Labels: recipes

Some of you who read my blog will be way ahead of me on your journey to reduce your environmental impact, and others may have just begun. The thing is that we are working on it - it's quite a journey back when we realize just how far we have fallen into the habits that produce so much waste.

This week's improvements:
Starting to buy from Greencane paper, which is couriered to me by the carton load. This product is made from  plantation grown bamboo and sugarcane waste. The packaging is totally biodegradable (a big tick there). I bought a mixed box with tissues, toilet paper and paper towels. 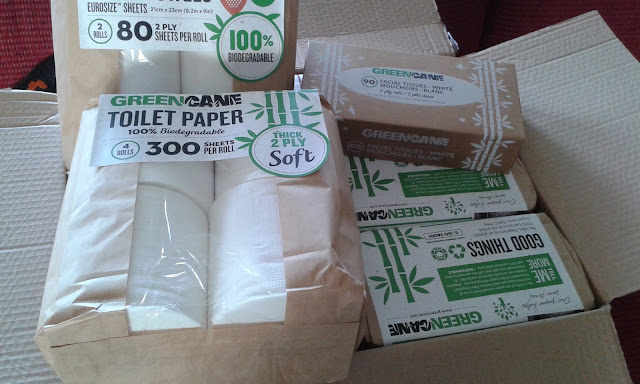 Yes I know it is greener to do away with paper towels, and honestly we don't use many, and tissues - well we have allergy sufferers here so they are non-negotiable. I figure at least they can be environmentally friendly ones.
I did a little price comparison, which wasn't very scientific, but there is not a lot of difference in the price for me.
Oh, and it's all good quality - you would think it was top of the line soft tissue.
If you haven't tried them - have a look - www.greencane.com, they are all around the world. That is totally not sponsored by the way.

Cotton wool balls! I tried to get our teen to use cut-up old tee shirt cotton squares to remove her nail polish - but this is obviously totally uncool and she is still asking for cotton wool balls (which only come in plastic bags). I would have bought plain sheets of cotton wool in paper wrap like you could in the old days, but I can't find any.
Well it turns out that old life jackets are full of shredded wool - who knew! So instead of throwing them away, I have removed some of the fluffy wool and rolled it into balls, along with some of that old cotton wool that I inherited.

I suspect that this too could be seriously uncool, but we'll see.

A-Gathering in the Garden in Autumn
Honestly my garden looks terrible and I didn't really think there was much in it, but a wander with my trug has produced all of this! 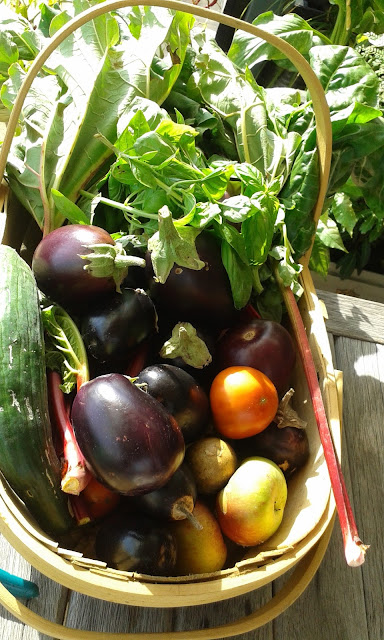 Rhubarb, cucumber, tomatoes, aubergines, cape gooseberries, windfall apples, peaches, silverbeet, basil, passionfruit and beans. Also it has been a great year for wild blackberries, they are still going.
I had better get a move on - I have pesto and blackberry&apple pies to make.


Posted by Anne@ArtyGreen in Paradise at 13:57 6 comments:

Anne@ArtyGreen in Paradise
Hi I'm Anne, lucky enough to live with my partner Derek and his daughter Katie on an acre of coastal paradise in Northland, New Zealand. I'm keen to green, with slow living and creativity. Leaving the nursing profession in December 2012 is allowing me to play music (sax), garden and create to my heart's content. Pop over to my Pinterest board if you wish..http://www.pinterest.com/lifeatriverhill/from-my-blog/